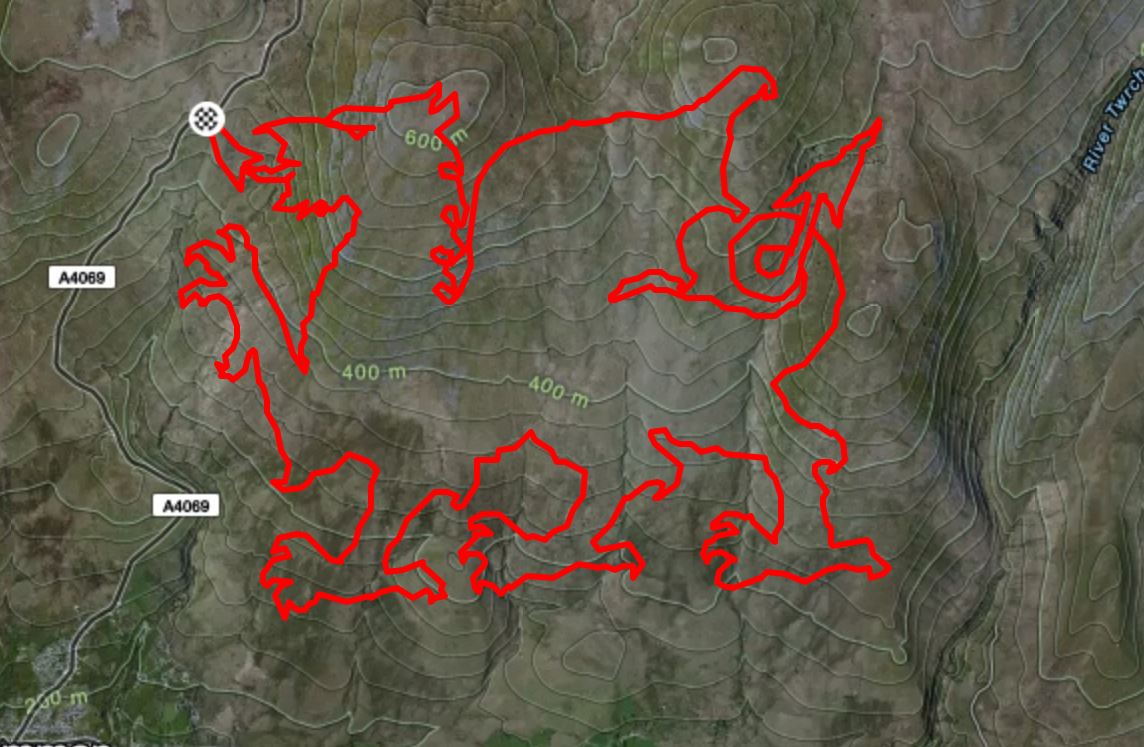 Like all great ideas it was dreamt up in the pub after a couple of beers. Martyn and I both belong to a fell running club called Mynyddwyr De Cymru. Try saying that after a couple of beers, let alone spell it!! It means the Mountaineers of South Wales – known more affectionately as the “pub club” – ‘cos that’s where you’ll usually find us after a run in the hills. The club has a long history of doing slightly off kilter runs; the Pembrokeshire Coastal Path relay in a weekend, running behind the waterfalls in mid Wales, running through a mountain to name but 3.

Our friend and fellow mountain runner, Nick had spotted some Strava art of a goat on the internet. For those not familiar with it, Strava art is using a GPS tracking app to draw virtual trails on the ground. You simply plot a route on the map, upload it to your GPS device and then follow the route. When finished you upload the log of your track to Strava and stand back and admire the results. Nick posed the question, as proud Welshmen could anyone do a dragon? After making a feeble attempt at a dog (it looked more like a pig with a fluffy tail) I worked out that it would be hard to do a dragon as a bike ride. If we can’t do a bike ride then the next best thing would be a run.

To do Strava as a run, you need a fairly large flat area, with no fences, uncrossable boundaries or be too hilly. It needed to be fairly large because GPS is not that accurate and if you want to get fine detail into your picture then it has to be large so that small GPS inaccuracies don’t show. I settled on an area of the western Brecon Beacons. It was an area I was a little familiar with having run some of the hills there a few years ago. I printed out an outline of a Welsh dragon onto acetate, laid it over my computer screen and simply followed the outline on my route planning software.

I needed someone stupid enough to agree to this and Martyn’s name came straight to mind. A couple of beers in the pub to plan it and we were all set to go. All we needed was a weather window. 10.00am one Saturday morning found us sitting in the car looking at the rain clouds drizzle onto a bleak wind swept hill side. It was time to go, no backing out now. Turning on the GPS device we followed the line slavishly, thinking we must look right Wally’s as we trotted around in a strange ritual dance, abruptly changing direction for no apparent reason visible to an outsider. Fortunately, being at the bleak end of the Beacons there was not many people to witness us, only a couple of dog walkers hurrying back to their car trying to dodge the showers.

We soon discovered the pitfall of having to slavishly follow a line. Normally in fell running you try to find the easiest route between A and B. Here we couldn’t, if there was a cliff face, a rocky outcrop or a marsh we just had to plough through it. I had been fairly careful to avoid the major geographical features when plotting the route but hadn’t foreseen all the smaller stuff. We made steady progress as we traced the head and upper body and wings and then came to the tail. There was mostly firm ground with occasional scree slopes to cross. I’d had to move the tail to avoid a couple of big quarries in the planning stage and wanted to trace a nice line where the tail appeared to overlap itself in a curl. I had managed to line it up with the only path on the entire hillside and felt quite chuffed that this bit of planning paid off as we ran in circles (literally).

We then came to the feet of the dragon and I wasn’t familiar with that part of the mountain. It was bog and knee high tussocks and grass, not helped by the recent rainfall. Our progress slowed to a walk and at times we were working hard to make 3 kilometres an hour. A run that was supposed to take 6 hours was suddenly taking a lot longer and we had run out of food. We were drinking from streams as we had also run out of water. The grins had disappeared off our faces as we trudged around, creating the pattern, crossing and re-crossing ravines and gullies that scoured their way down the mountainside.  “Good training, good training”, became our mantra, interspersed with “let’s finish this, we’re not doing it again”.

After 9 hours we finally finished, it was starting to get dark. We had run/walked 44 kilometers and gained and lost approximately 1900 metres of ascent and descent. Definitely more than a marathon in every sense of the word. Our bodies were no longer temples, the first food we saw when safely back in the car was McDonald’s, I confess we were that hungry we had to stop………..

For those with an interest you can see the whole Strava run here:

PS If you are thinking of doing something like this I would recommend not doing it on April 1st. It was the only day we were both free with a reasonable weather forecast – but the consequence was unforeseen as a lot of friends thought we were taking them for April fools.