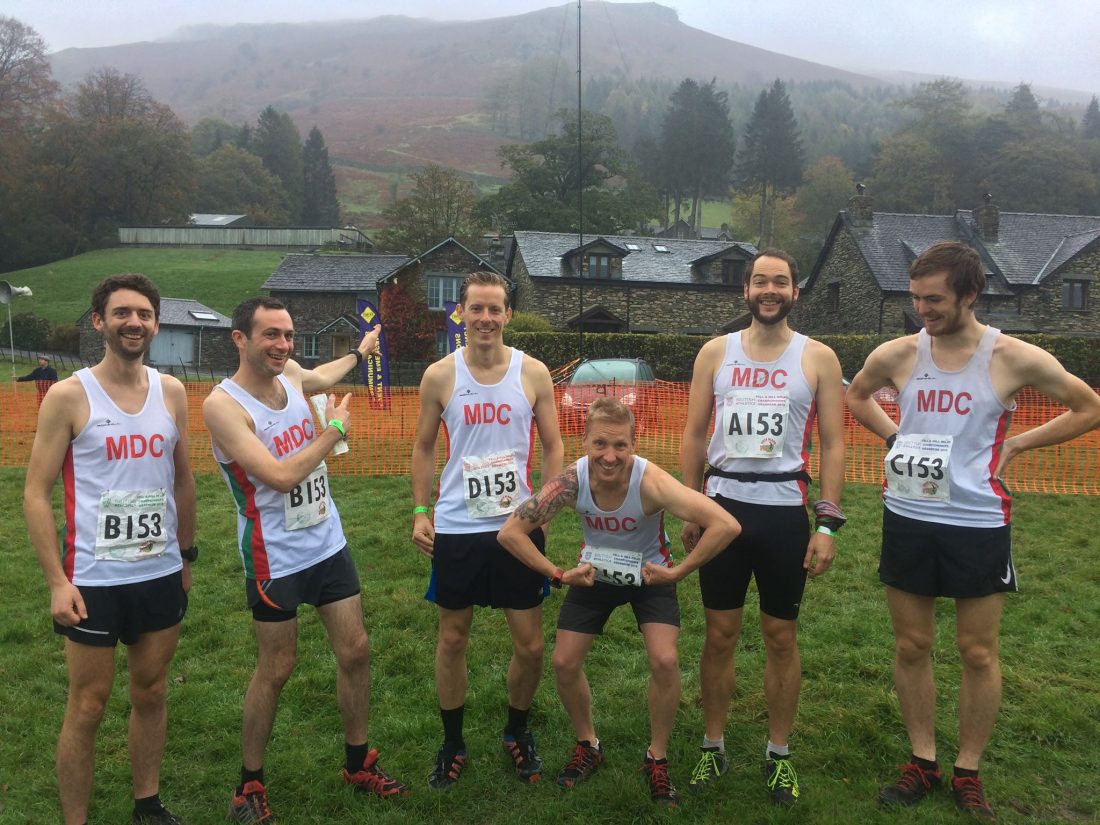 This year the fell relays were in Grasmere, the heart of the lake district and arguably the home of fell running. Organised by the local club (of the many many fell clubs in the lakes) Ambleside AC, it was a great event. Where fell runners of all sizes (although mainly resembling driftwood) come together to race, not for themselves, but for their clubs and teams. This sense of camaraderie makes the fell relays truly special and personally, one of my favorite events.

After the 2017 fell relays in Snowdonia, where the men’s team smashed it (myself dragging my heels), there was no chance that a team wouldn’t be footed, and after some last minute switching between legs the line up was as follows:

We all decided to go up on the friday night and stay at the youth hostel in Grasmere. Some hardy souls opting to camp, and some other “wimps” who I won’t name cough… Martyn… stayed in the warmth of the hostel. I am reluctant to admit that after a night shivering in my tent and all of my clothes, next time I might be on the wimpy side. Martyn, Alex and I shared a car up, with myself joining at Lancaster, thankfully I missed out on the severe traffic. After picking me up the first priority was some grub, which is apparently hard to come by at 8:45 on a friday somewhere north of Lancaster. We arrived fairly late, and Matt and Nate had already set up their mansion of a tent.

It was an early rise on the day of the relays, in order to cram in a big breakfast to fuel us over the fells! The team were split, some preferring a basic breakfast of porridge and flapjack, and others going for a full english served up by the youth hostel. When suitably fueled, it was a short walk (or drive) to registration, after which it was a slightly longer walk to the event centre. I detoured via the local bakery AND the local gingerbread factory for some well earned post-race snacks. Who knew that grasmere was renowned for its gingerbread? The team got to the event centre ahead of me, but it was surprisingly easy to find them when I arrived, specifically Martyn who was checking out the wares of the traders. If I had arrived later it would have been much more difficult as the tent became jam packed with runners, cake and excitement. I’m not kidding, there were at least two cake stalls that I could count, plus all of the cake that runners brought with them anyway.

Katie Roby – the organiser – had brought an array of snacks, some wholesome, and others not so much, these were very much appreciated along with the organising of our rag-tag bunch to begin with. Thanks also to Matt – the cap – for making sure we were all there and ready to go! The team were excited (at least I was :D) with perhaps a hint of nervousness.

Whilst waiting I spotted another runner tucking into a whole tin of cold baked beans, I mean whatever works right, but I still feel sorry for the runners on his tail! 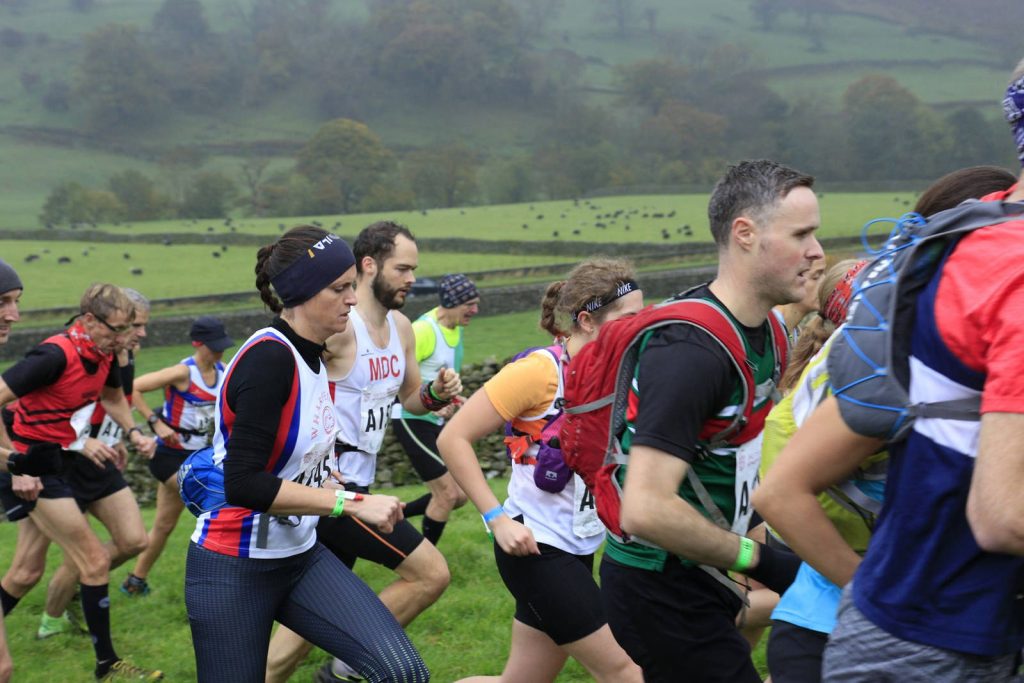 Ollie was our first leg runner. When the time came, he shuffled towards the start time to join the rest of the pack. I can only imagine the adrenaline from starting with so many other runners, needless to say Ollie looked fairly calm. It must be difficult to pace yourself when trying to fight the instinct to run quickly to keep up with the pack! The start was set up so that spectators could watch all of the runners round a field and take off up the first hill. So when the gun sounded we were in a good position to roar our support for Ollie as he came flying past. He had a tough 5 mile run with 730 m of climb, they certainly have some steep hills here. From the same field we watched as the runners turned into insects climbing up a mountain of an ant-hill.

The leg 2 runners Alex and Matt started to wait patiently in the “pen”, building anticipation. You have to jump to see over the other runners to make sure that you don’t miss your team-mate coming down the final straight. Some unfortunate runners were left stranded in limbo, whilst they frantically waved and shouted for their team-mates.

Ollie came in with a cracking time of 1:02:36 in 115th position, just 50 m behind Alun Wood from the Mynydd Du Mens team: The race with our rivals was on! Next out of box were the first duo Matt and Alex, with nothing except 6.7 miles and 850 m climb between them and the finish – a walk in the (lake district national) park. They started up the hill in the opposite direction to the first leg runners, a good pace, and hot on the tails on Mynydd Du. 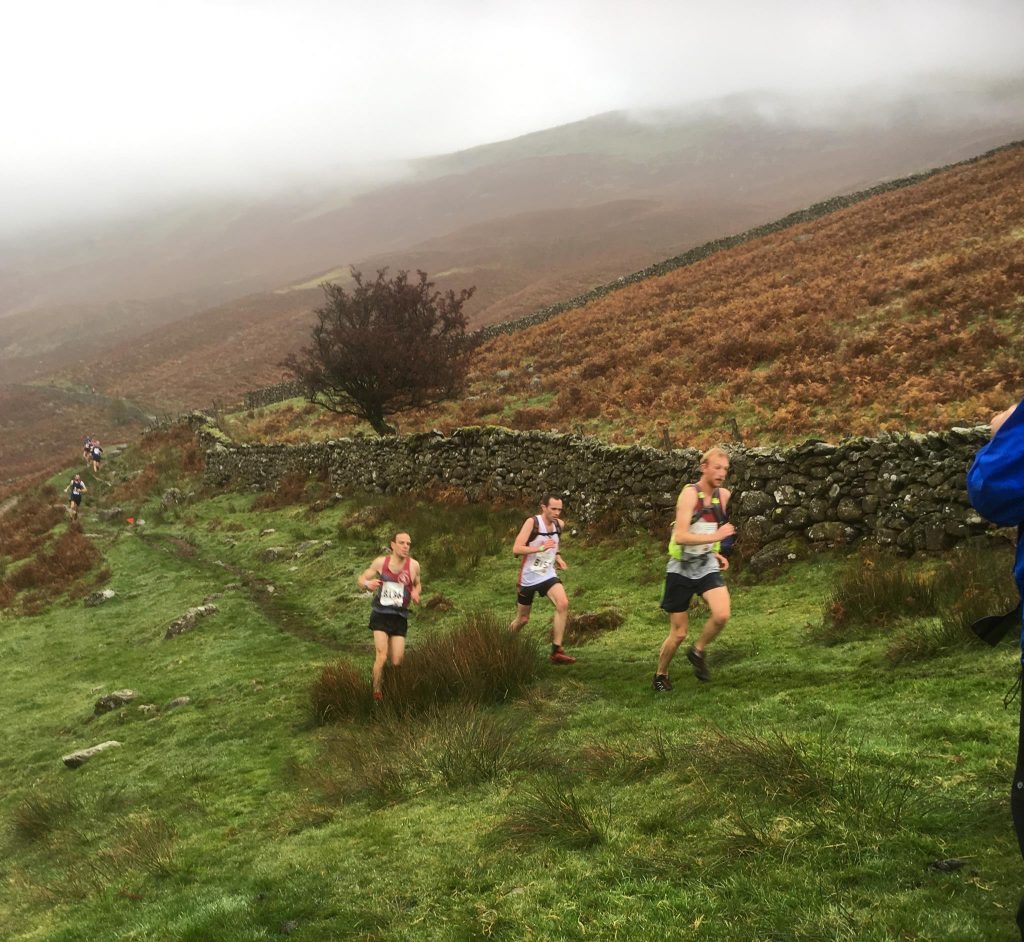 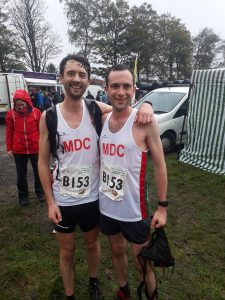 Whilst warming up in the field adjacent to the finishing straight it was now our (Martyn and I) turn to start getting nervous. Martyn needed the loo, and didn’t want to wait in line, so managed to get away with it during a suitably timed lunge. When Alex and Matt came onto the final straight we were ready, and they were ahead of Mynydd Du! Some great running from Alex and Matt, dragging each other both up and down the hills. I always wonder if it is better to have two runners who are equally fast up the hills and down the hills to make sure there is no speed lost, or to pair a good uphill runner with a downhill runner, in the hope that they each go faster to catch up with their partner? Either way, the leg 2 duo finished in a time of 01:17:17, 61st position for their leg, and a minute and a half ahead of Mynydd Du!

One of the pair slapped Martyn, and we set off in the same direction as the leg 2 runners. Martyn was fast out of the block and I had to slow down to make sure I didn’t burn out. His legs move so fast compared to my (arguably more elegant) bounding strides, I admit I had been worried about not being able to keep up with Martyn given his current form. We collected the maps from a little up the first hill, and had only a few metres to decide which direction to go. Up and over the hill, or the slightly longer round and up the valley. I made the wrong choice in this instance and dragged Martyn up and over about 60m extra climb – sorry Martyn. Luckily this was the shortest leg, and we hit the rest of the controls pretty bang on, at one point crawling up a near vertical slope on all fours. The terrain was very technical, especially some of the descents, but overall I thought it was well planned and we had a great time over the course. That is, until we got to the final control… 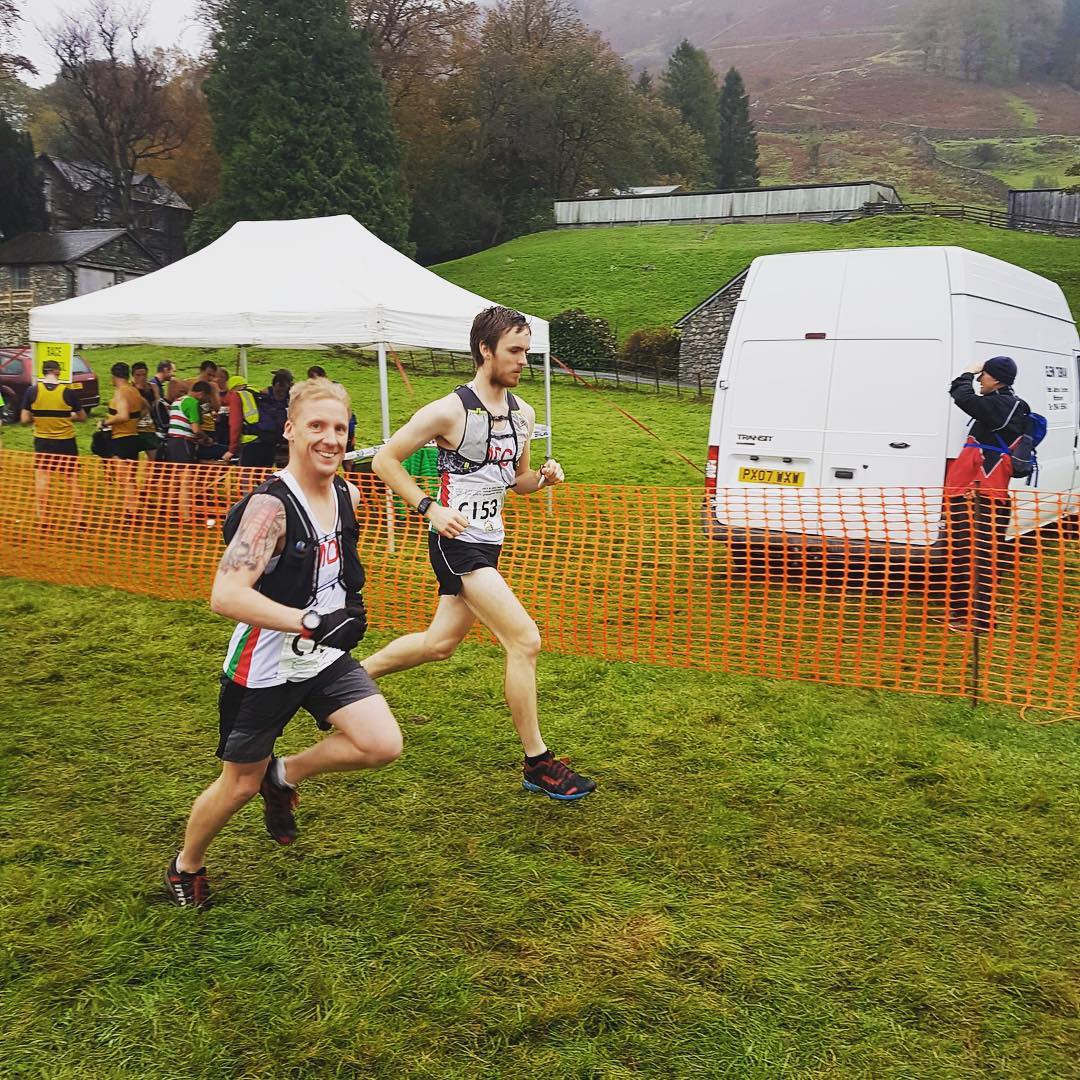 After many miles, we had a gentle downhill from the final control to the finish. Martyn was pleased, and started to pick up the pace. He went down, smashing his knee into the gravel. We continued, but it was clear that Martyn was in quite some pain. We made it to the finish shortly afterwards in a time of 01:45:10, and 83rd position for our leg, still ahead of Mynydd Du. We were both in a bit of a state when we crossed the line… 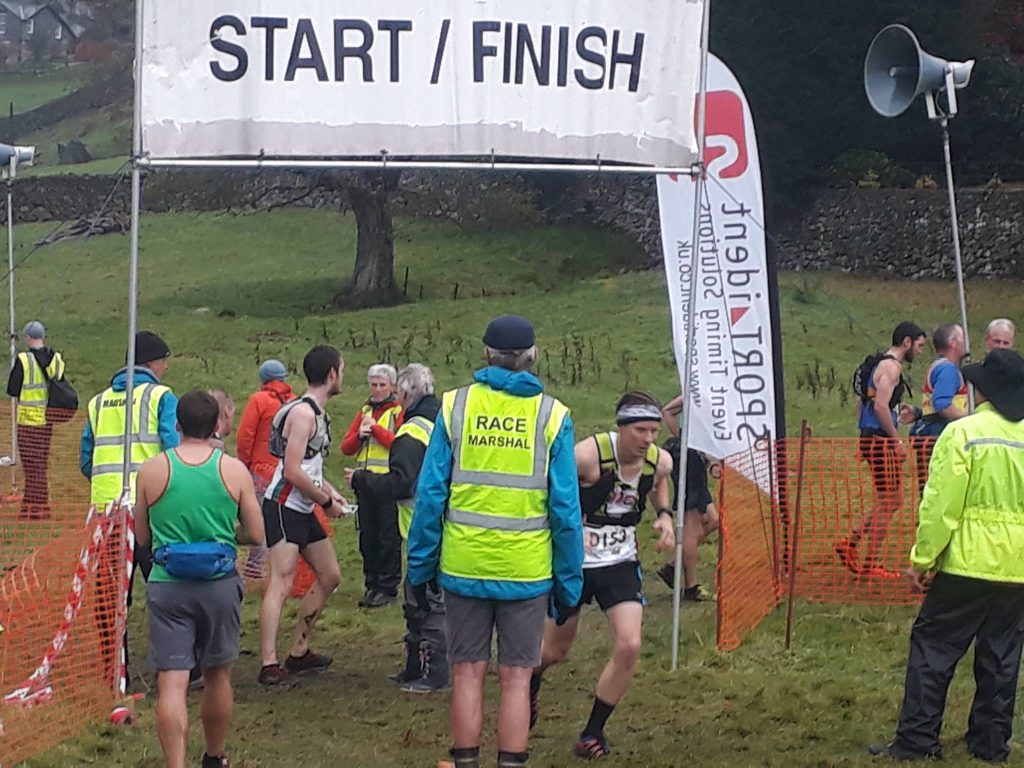 We passed over to our final leg runner Nathaniel, who powered off round the final 4.3 miles and 600 m of climb. It was all down to Nate to maintain our lead on Mynydd Du. Meanwhile, whilst we were waiting for the final leg runner, I tucked into some of the gingerbread and cake that was available. There is nothing quite like well earned cake after a hard run! 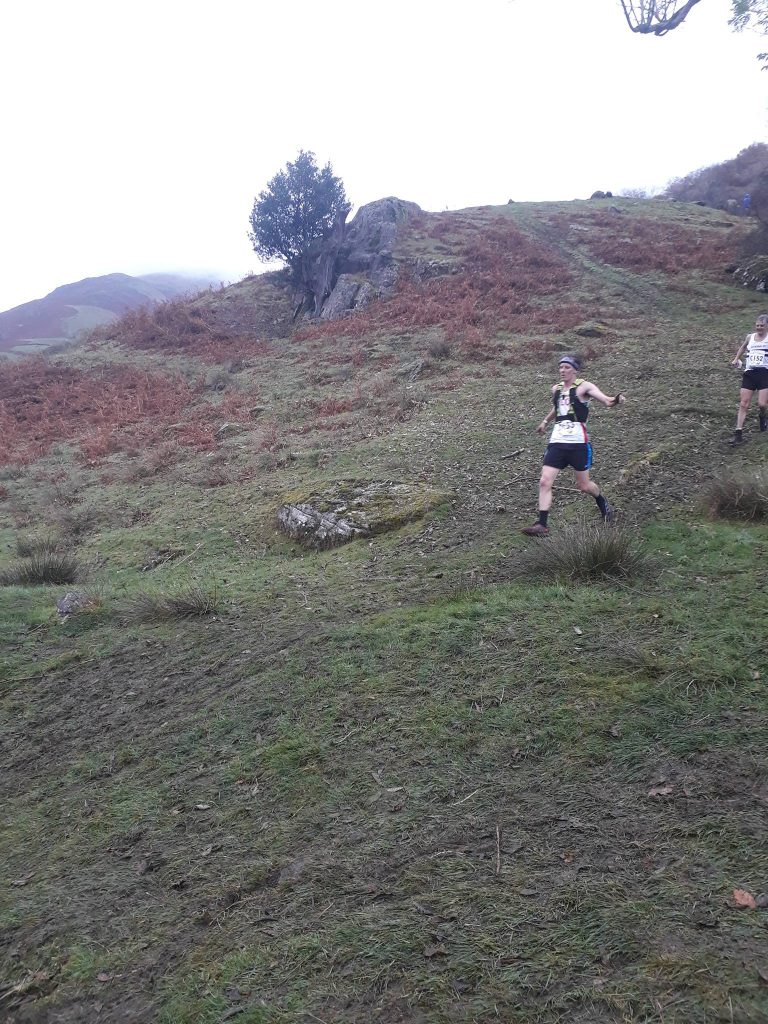 We all waited eagerly, watching the hillside for Nate to come in, hopefully ahead of our rivals. The final downhill was the same as the first uphill, visible from the field next to the event centre. It was a brutal downhill, made especially difficult by rain and hundreds of runners that have torn up the ground. Too fast and you’ll be coming down on your backside! We caught a sight of Nate, picking up the speed as he approached the finish line on the final straight. When he was a bit closer, we saw that he was ahead of Mynydd Du. He crossed the line in a time of 00:41:18 and in 128th position for his leg. Great running from both Nathan and the rest of the team, and once again proving our superiority over our rival club Mynydd Du. 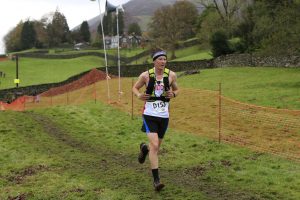 After we all finished we decided to go and grab some grub from one of the several private event caterers. We were given a food token each, so could choose which we preferred. Some queued up for the bbq tent, and myself for the only vegetarian option, the falafel stand. I waited in line for 1 ½ hours – not happy – a sentiment echoed by the other hungry runners around me. Half way into the queue I was joined by Alex, who hadn’t realised that there was no vegetarian bbq option. To make matters worse, when we had gotten to the front of the queue the falafel man ran out of food! Luckily I managed to get a portion, but Alex, realising that he had jumped the queue, stepped aside. Me and alex then shared our meal in true team spirit. This was the only let down of the event, no hungry runner wants to wait that long to get fed, especially when most couldn’t care less about the quality of the food, fast pasta would have fitted the bill just as well. Although, the falafel was pretty darn tasty, it wasn’t worth an hour and a half of queue time!

After the event, we went our separate ways. Some stayed the night for another day of running on the Sunday, whilst other got various transports home. Overall, I had a great time, and I’m pretty sure the rest of the men’s team (and the other teams) would agree with me. It might be a long way to go for a short event, but it is definitely worth it! Hopefully I will get the chance to run again next year. Until then, have fun with winter training!