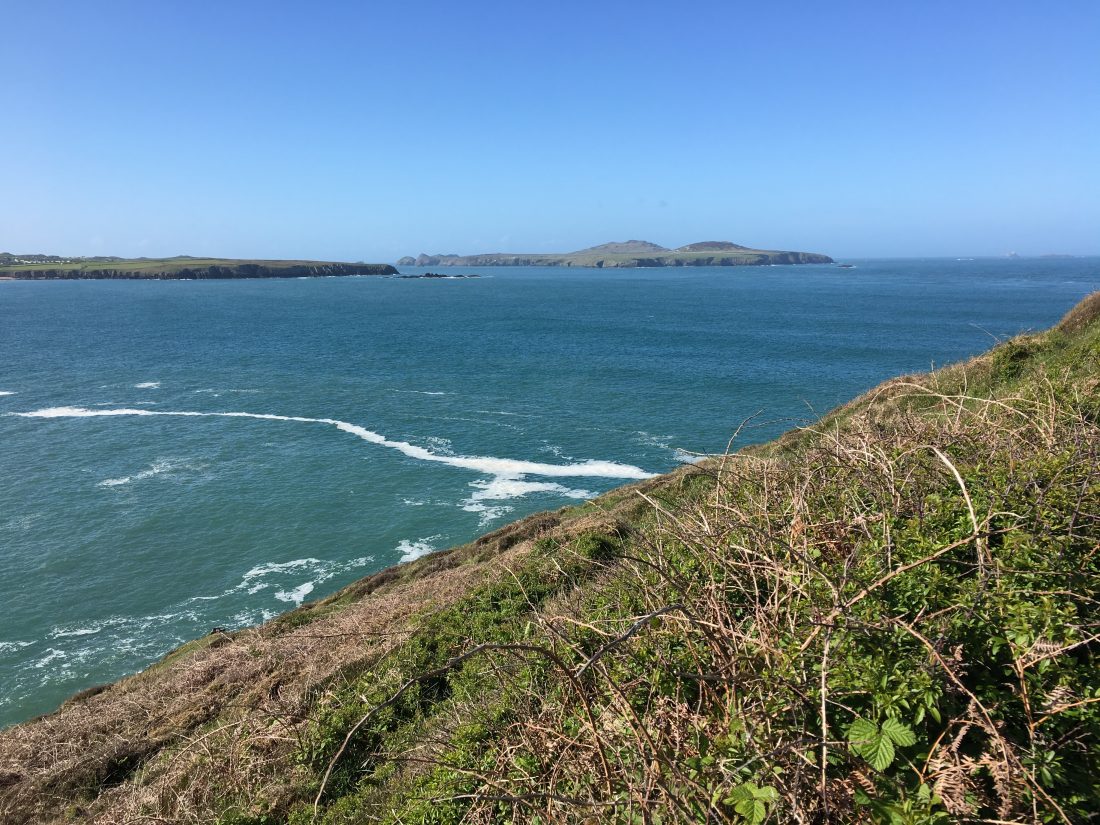 – Another epic with Alan Stone…

I have a bit of habit for signing myself up for these longer faces. They seem such a good idea at the time you put your name on the dotted line…..

Run Walk Crawl have been laying on  ultra races in and around Wales for a number of years now, and is run (excuse the pun) by Ben Morris and Joe Timmins. This year saw their first running of the entire length of the Pembrokeshire Coastal Path over 5 days. They would transport your overnight bag between camps and all you had to was carry what you needed for the day and run between them. It was necessary to provide your own tent and you’re your own food. The coastal path is approx. 300km in length. I say approximately because there are variations on it and it does depend on the state of the tide as to whether you can choose the low level (across the beach) or high tide route. Also closures around the military firing range can affect how far you run along that section. 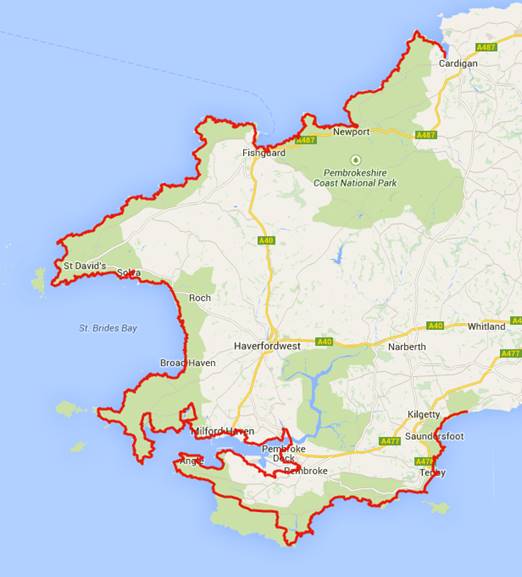 Saw me getting up at an unearthly hour of the morning to drive to the finish in St Dogmaels. Road closures along the M4 forced me into several long diversions and I was worried that I might miss the coach that was going to transport us to the start. I arrived sweaty at the finish before I’d even run a yard!. I parked up and said goodbye to the car that I wasn’t going to see for 5 days. The bus picked us up and transported us to the start in Amroth the other side of the Pembrokeshire peninsula. There were only 5 of us going to be running the whole length, although a few more would join us for the 100 mile event over 3 days and the 100 mile non-stop event. A disappointing turnout for what I thought would be a much better supported challenge. Time for a few photos and we were off. Fresh bodies and minds meant a good pace for the first day. A few odd looks in Tenby but the route finding was straight forward, just remember to keep the sea on your left! There was some great running over the sand at Freshwater East and Stackpole warren. The sound of a gun battle and tank fire ahead was an indication that either the 3rd world war had started or there was an exercise occurring at the military firing range at Castlemartin. We duly ran into a red flag and a warden directing us off the path and onto the surrounding roads. This was a bit tedious but I didn’t fancy being live target practice. I walked with Jon into the first camp in second place by Freshwater West. I was trying to save my feet from the pounding that hard tarmac gives them. We had a good camp spot. I erected my tent quickly and spent the evening sorting my feet and nutrition. I have long since worked out the 8 “F”s that can stop you from completing these longer challenges;

Saw me up early, cooking my breakfast and packing the tent. I had sorted my gear for the day the previous evening so was ready to go by 7am. This was going to be the longest day. It was provisionally listed as being 67 kilometres in length but ended up being nearer 77. I suspect because it was high tide and we couldn’t do the short cut over the stepping stones at Sandyhaven. I also had a couple of navigational issues finding my way around the farming country around the oil refineries in Milford Haven. I lost over half an hour of time and came into the first feed station and checkpoint at Pembroke Dock in last place. A psychological low. The next few miles were a bit grim, both emotionally and also scenically. The route finding was more difficult as many of the signposts had been vandalised or removed. However, by the time I reached Sandyhaven I was in a much better mood. Although the tide was in I did briefly consider swimming the 100 metre gap to the other side. This would have saved a 6 km detour inland, but I didn’t think that would be cricket. I arrived at the camp in Dale after 13 hours on my feet and couldn’t face the 400 metre walk to the pub down a hill. Elan Winter from Up and Under very kindly helped me erect my tent and the support crew all shared their BBQ food with me – so I didn’t even need to cook my own food that night. I was unconscious before my head hit the pillow. 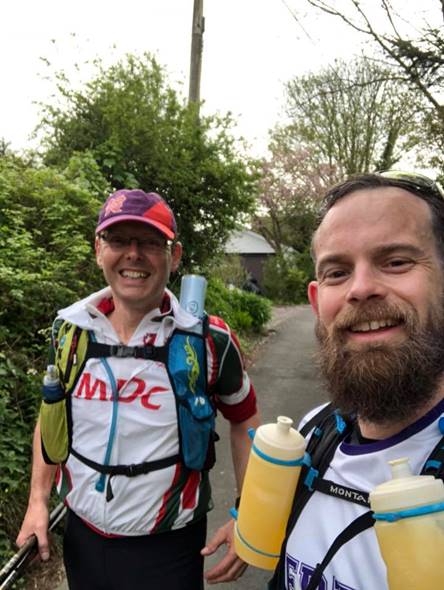 Saw me awake at dawn and feeling remarkably fresh. Navigation was much easier as it was almost entirely along the coast. I did end up doing a detour up a hill in Broadhaven that was unnecessary, but felt much better about my performance. The scenery was just to get better and better over these 3 days. I was enjoying myself and the sun shone. Time seemed to pass quickly and I made good progress. The final run into the finish was deceptive as I could see the farm quite close, but we had to run around the coast path and seem to do almost a complete circuit of it before the finish line hove in sight. Again I opted to stay on the camp site and sort my feet, fluids and food and prepare my bag for the next day. We were joined that evening by the runners who had joined us for the last 3 days and were “only” doing 100 miles. Many had not run an ultra before and were in for a rude surprise. Mesh from MDC was there setting up his tent. His grin was as wide and as infectious as ever.

Saw many of the 100 mile racers choose not to continue. They had had enough. My lack of preparation was starting to show. I was starting to get the tendinitis in the front of my shins that I normally get on longer runs, but it was appearing earlier than expected. They felt bruised and swollen. A couple of the other runners were also experiencing this and I was in the process of losing a toenail. Par for the course…..

This is definitely one of the prettier sections and the one I was most familiar with. I have done a lot of running around here as I frequently camp at Whitesands. I know the path well and there were no navigational issues. The weather was glorious sunshine and very hot. I quickly got to Abereiddy. I couldn’t resist stopping at the ice cream van for a coke and large double waffle cone. I was busily stuffing my face when I bumped into Alice Bedwell from MDC, who was out with some work colleagues walking the cliffs. The check point today was at Porthgain just a few miles further on. I refuelled and filled my back pack with 3 litres of water. I didn’t want to carry 3Kg on my back but knew there were no more water stops until Fishguard. I saw another runner with only two 600ml bottles and asked him if he had enough water. He assured me he did and overtook me and disappeared into the distance. I caught up with him a few miles further on. He assured me he was okay so I carried on and passed him. I hadn’t realised he had run out of water and was actually beginning to struggle. He later started vomiting and further down the trail collapsed and had to be admitted to hospital with an acute kidney injury due to dehydration. This shows how quickly things can go wrong on these events and how you need to be meticulous in your planning and preparation. Things can spiral out of control quickly.  I was relieved to hear he subsequently made a full recovery after spending a night on an intravenous drip.

I arrived in Fishguard and had used all my water. I had to call in at Tesco to pick up some more before continuing to the camp a mile inland and up a steep hill. 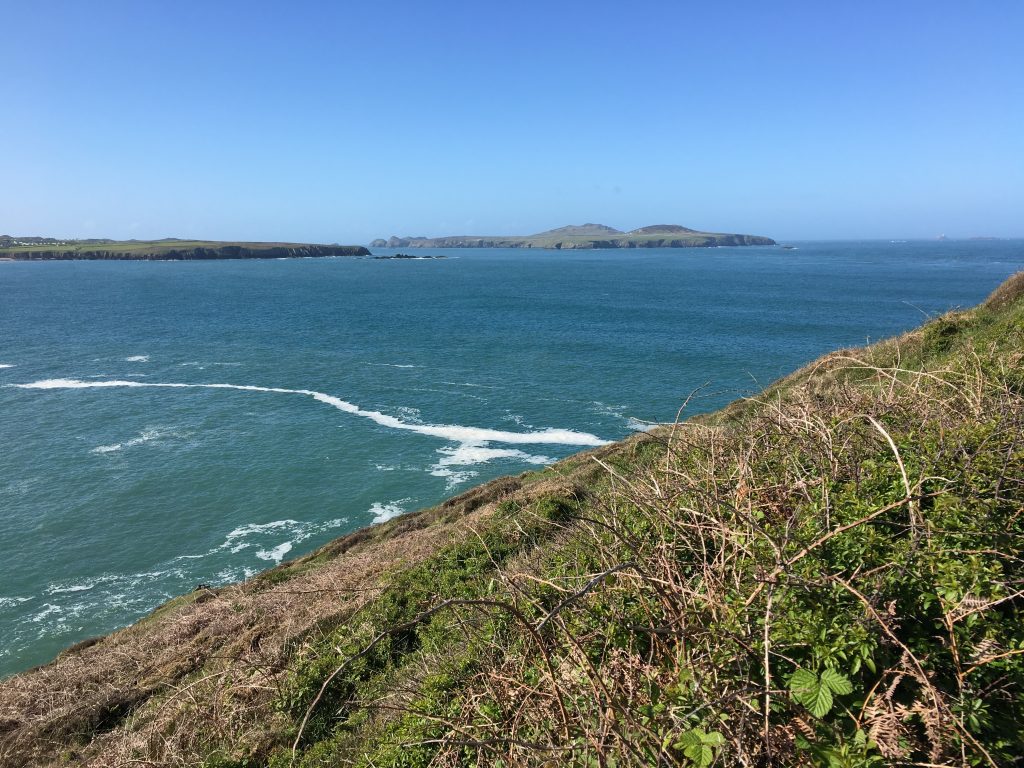 Day 5 Fishguard to the finish at St Dogmaels

Is probably the best section of the coast path in my view and a part I didn’t know so well, having only done a couple of sections of it before on the MDC relay. It is very hilly and you have to climb the sides of a couple of the Preseli Mountains where they disappear into sea cliffs. Great scenery and views and not travelled by many. I recommend this section to anyone. The only downer was Newport, which seemed very touristy to me, in comparison. This was to be the shortest day of the race. I came into St Dogmaels in 4th place out of 5. The last section is along a stunning section of a sandy estuary, Poppit sands. I received a warm welcome, a £20 gift token as 3rd male and food and drink. The shower was too hot to stand under and I nearly burnt myself! The only thing left to do was to drive back to Cardiff ready for work the next day.

All in all this is a great race that deserves to be better supported than it was. I hope it flourishes in future years.