The Longest Straight line in Wales

The Longest Straight line in Wales

Like all good stories this one began in pub. Martyn and I are both experienced hill runners and have previous form on thinking of grandiose ideas and then going out and doing them.
A previous example being the Dragon 2018, where we drew the Welsh Dragon on the hillside as Strava art. We had read an article about the Scottish couple who had completed the longest straight line in Britain when they crossed the Cairngorm plateau in 2021. The
rules are simple. Keep walking in a straight line without crossing any tarmac. Callum Maclean and Jenny Graham took 83 hours to cover 78.55km. Ordnance survey in 2018 though the longest straight line in Wales was only 22 kilometres. Having a careful inspection
of the maps revealed a possible route in mid-Wales that gave a distance of 30km. Being able to plot a line on the map is one thing, but is it doable? Callum and Jenny showed by doing, that it was in Scotland. Could we do it in Wales?

There is a right to roam in Scotland which doesn’t exist in England in Wales. We therefore had to think carefully about where to put the route that didn’t involve trespassing on farmer’s fields. The obvious solution is open access land in upland areas. There is also forestry land in these areas, but usually the landowners show a relaxed attitude to visitors (except when logging operations are in progress).
Having plotted the route on the map – not difficult – just draw a straight line, we had to look carefully at maps and satellite images to make sure there were no impassable objects on the route. Lakes, fast flowing rivers and cliffs being obvious examples of objects that could stop us in our tracks. I also had not really considered forestry to be such a big problem. I have often run in forestry, usually on paths and had not experienced too many problems. How bad could it be?

On the equinox in 2021 we made best use of the long hours of daylight by leaving from Cardiff early and driving up to the finish near Tregaron where we left a car. We then drove to the start near Newbridge-on-Wye and left the second car. It was then a short walk to the
starting position where we set our GPS logging devices and proceeded to follow the straight line copied onto mapping software on the phone. A battery pack ensured we weren’t going to run out of juice. It was a hot day. Our problems began immediately with gorse bushes
obstructing the route. These had not been visible on the satellite maps. Then came waist deep bracken which slowed our progress further. Being a line on the map meant we couldn’t just follow paths and we had to accept whatever the terrain threw at us. Walking
up steep slopes at an oblique angle became the pattern for the next couple of hours. The highlight of this stage of the day was seeing a golden eagle. The scenery is stunning to look at. Unspoilt vistas as far as the eye can see with very few signs of human activity on the
landscape. 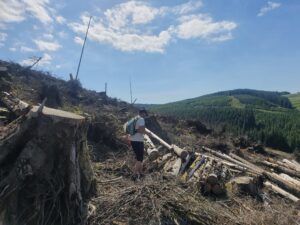 It was hot day and keeping up with fluid replacement was difficult. We had to resort to drinking from fast flowing streams, hoping there wasn’t a dead sheep upstream. Progress was also slowed by the knee high tussocks of grass commonly called baby heads. These
grow randomly in boggy terrain and are difficult to cross because you can’t stand on them as they tend to collapse under your weight and putting your feet between them risks sinking into bog. The terrain was very hilly in this section with a few scrambles between rocky
outcrops. In all we were to climb nearly 1500m during the course of the day.
We then came to the forestry section that we had to cross. Following a line on a map meant we couldn’t go around it. No choice but to go through. We are now experts on the different types of conifers and what they can do to your body. Very young tree are planted with
space between which you can run through. As they grow more mature the branches cross into other and start to create an impenetrable jungle. As they grow older still the lack of light reaching the forest floor causes the lower branches to die and wide corridors open up
between the trees. After they are felled the hillsides get littered with rotting tangles of branches, stumps and felled logs. We encountered all types. Our bodies will bear the scars until the day we die of the scratches and marks the pine needles and branches excoriated
into out bodies.

At times our pace was reduced to a slow crawl, over and under fallen trees and pushing aside branches as the needles pierce out skin. Blood flowed. The flies loved it. Our shins took a battering as did our arms. Our speed dropped to less than 2 kph. Expletives littered
the air. If it wasn’t for having already completed more than half of the route we may well have abandoned our efforts. As it was we became more determined to finish. The last couple of miles saw us re-emerge from the forestry and start to make quicker progress on the one mountainside again. The end looked to be in sight when we hit the final piece of forestry. It was only meant to be 500m long but it was clearly impenetrable. There was no way through. We had to do a 50 meter detour off to the side to avoid the worst of it.

Descending off the last hill at 8.0pm at night we were well behind schedule. It was with great relief we found the car we had abandoned earlier and started the process of collecting the other car at the start and heading homeward.
The final gpx file looks as follows;

A memorable day for all the wrong reasons. It was much tougher than I expected and by the end everything hurt. Flies buzzing around the open wounds on our legs was the final cherry on the icing. Will I do it again? Not until the next project fires up the local pub after a pint or 3. 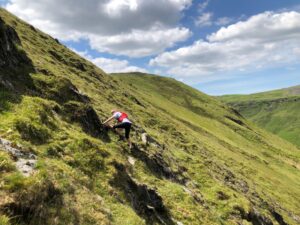 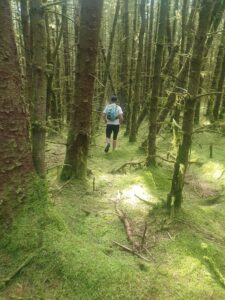 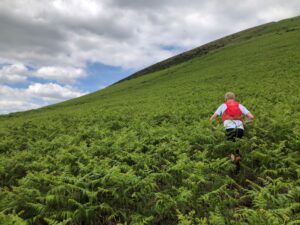 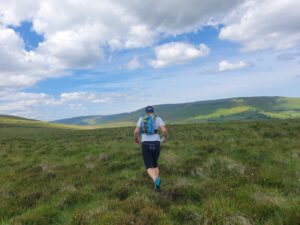 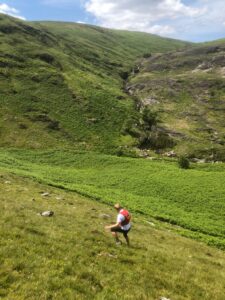 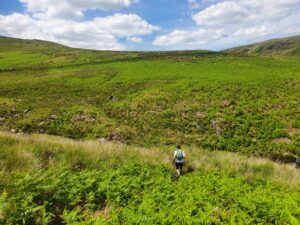 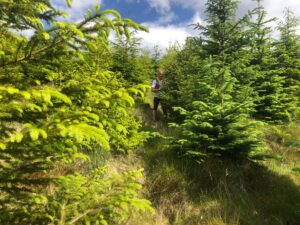 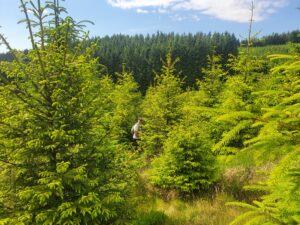