The Transfan is a classic race route across the Brecon Beacons. It is run annually as a training run by MDC each year.

In 2019 we’ll be running from West to East, the traditional direction.

It’s a hard route that traverses the tops of the Beacons, from Llandeusant in the West to the bottom of Pen y Fan in the East. Sometimes it runs with the landscape; other times it just charges straight up and straight down, hill after hill. It’s rough-going, and route-finding is challenging in poor-visibility – a classic test-piece for the Beacons.

“Those who are not familiar with these hills might like some further information about the course. Its toughness derives from the absence of connecting ridges between the mountains; although the climb from Llanddeusant to Bannau Brycheiniog is fairly gentle, the rest of the race is a relentless switchback – but at least this means that one can usu­ally rely on finding a stream to drink from at the foot of each mountain. Apart from a few stret­ches of nasty tussocks, most of the course is very runnable, though the hordes of day-trippers on Pen-y-Fan may provide addi­tional obstacles! The finish at Cwm Llwch is an idyllic place in which to lie down and expire.”

The official route from West to East is as follows:

IMPORTANT – The summit of ‘Y Gyrn’ is not a mandatory CP, but runners must use the northern path from Storey Arms and not use the Pont ar Daf toilet track.

In 2016 the first ever Transfan Triathlon was completed by Chris Jones and Hannah Moulton, Cycling, Running and Caving. This consisted of:
– Cycle Llandeusant to Cwm Llwch
– Run most of the Transfan
– Explore some cave (where?)
A time wasn’t recorded, but they finished in the dark.

HISTORY OF THE TRANSFAN

The Transfan was invented, in common with all the other now-classic South Wales Long races, by Philip Dixon, the evangelical minister and sometime life insurance salesman, who arrived in Blaenavon in the late 1970’s to spread the Word and also the Creed of the Long Traverse. Having broken us all in gently with Llanbedr – Blaenavon, Brecon Beacons and Black Mountains races he unveiled his piece de resistance in 1984. Organisation was in the lowest of keys, this being in the days before WFRA rules and Elf’n’Safety. Martin and Kay took over the event in 1987, and introduced novelties such as marshalls. However in the days before portable communications devices the organisers still had no idea what was happening until the marshals reached the finish, generally some time after the runners. Somehow they never lost anyone more than temporarily, even on the epic 1988 race which is still spoken of in hushed tones by those who survived, as a struggle against weather that today would see the event called off. Since then it’s run into access rights problems and hasn’t been allowed as a formal race. Since 1997 it has been run informally and far less competitively! The original trophy is a scale replica of the hills traversed, and makes for a highly desirable toast rack. It is now given to whoever is felt to be most deserving, often for a first time completion, and not necessarily the first finisher. 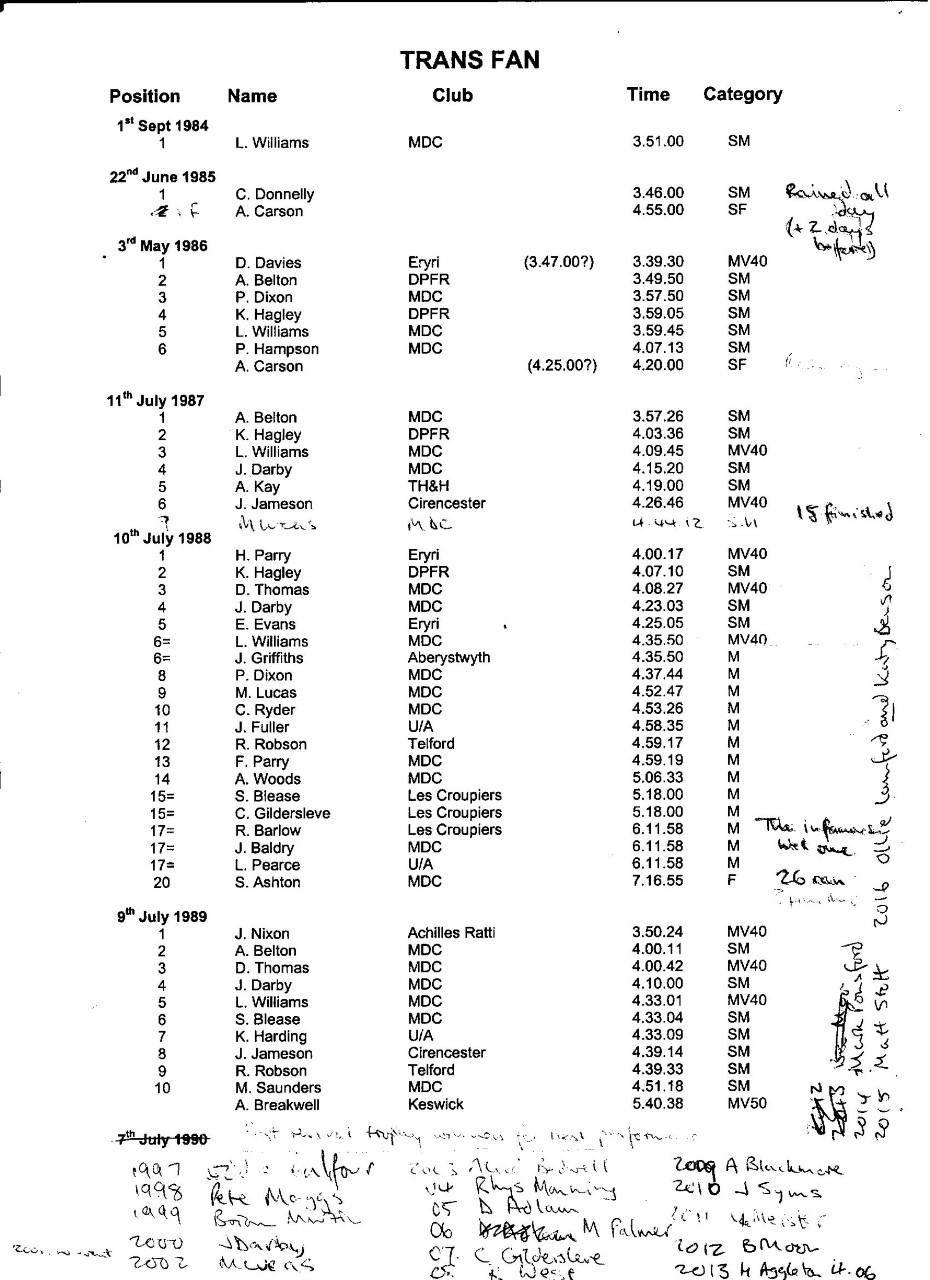 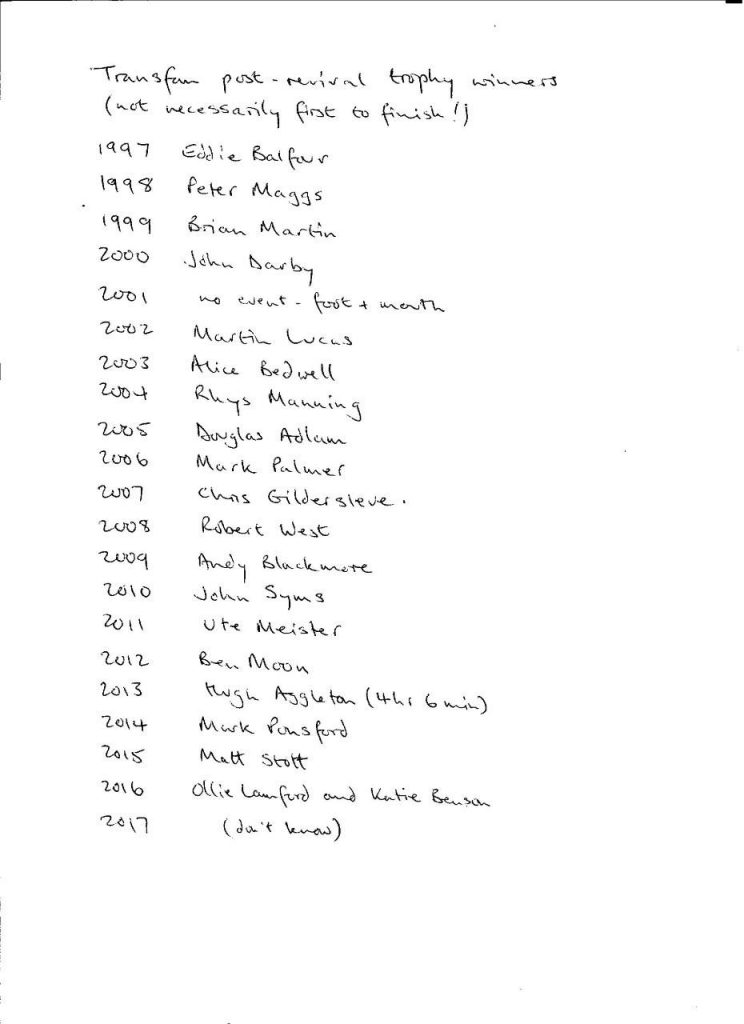 This was the inaugural staging of a 20 miler across the wild South Wales Black Mountains and the Brecon Beacons, but it had an inauspicious start. With little more than half an hour to go, there was hardly any sign of pre-race activity. The 12 or so who made it to Llanddeusant enquired of each other which one of us was supposed to be in charge. Then Phil Dixon the organiser arrived and painted numbers on our wrists. I was pleased to see Pete Griffies(?) and speculated on the possibility of Andy Lewsley or Adrian Pickles putting in an appearance to make a team.

Phil favours the laid back approach, where man (and woman) are pitching themselves against the elemental forces of nature in an untamed environment, without too many concessions of the easy life. (Un-manned checkpoints and no drinks anywhere – things like that.) It was the sort of race where the runners had to get down on their hands and knees before the start to search for my contact lens. In the event I ran a bespectacled and very determined not to lose touch with a blurred outline of Les Williams, until my vision adjusted.

The route climbs steeply out of Llanddeusant to Carreg Yr Ogof before swinging east along the precipitous edge of Bannau Sir Gaer and Bannau Brycheiniog. A minor road is crossed in the valley of the R.Tawe before you go up, and then down again to Sennybridge road. Here the fun really starts, when you traverse the remotest section of the route as far as Storey Arms, crossing the Ystradfellte mountain road on the way, and navigating to four checkpoints, including Fan Gyhirych and Fan Fawr. Much can go wrong in this area if you make bad route choices, are a doubtful navigator and don’t know the area well. In my case impaired vision plagued me some of the way and was responsible for my mistaking sheep for runners!

From Storey Arms the path is thronged with people taking part in The Great Outdoors fashion show, who watch us struggle up to Pen-y-Fan, the reigning peak of the Beacons, before we disappear hundreds of feet into the deep cwm below to finish at Cwm-llwch.

Waiting for us here is a lovely tea – cakes, other good grub, and more cakes. All this is available in the secluded wooded valley by a river, where you can lie on the grass and look back at the north face of Pen-y-Fan, thinking what good country it is for gazelles and mountain goats.
Frank Thomas

[According to the Dark Peak News (Xmas 84) http://www.dpfr.org.uk/newsletters/download/14.] 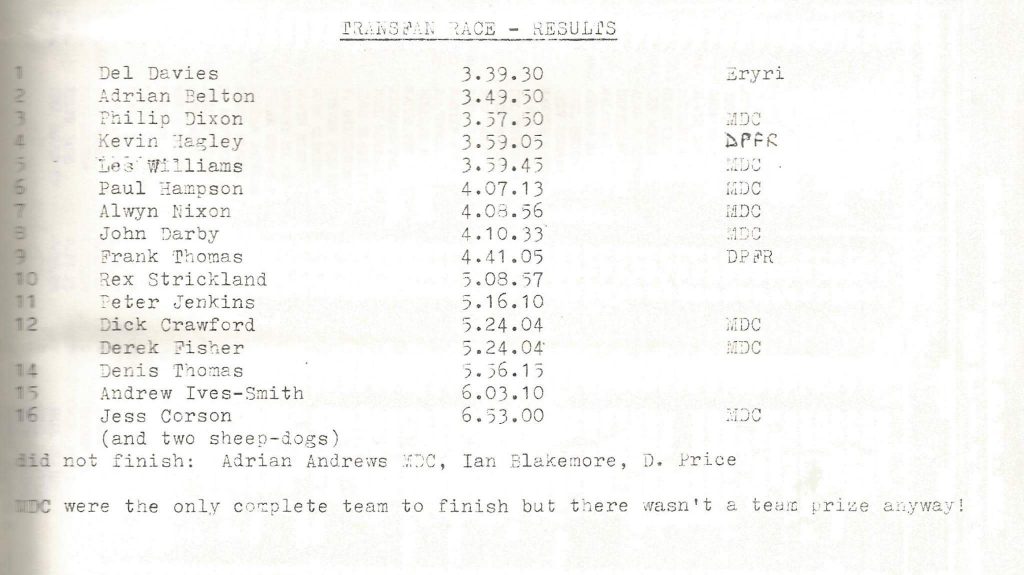 Overnight strong winds and heavy rain cleared to give superb views and a slightly lower temperature than earlier in the vveek. The field of 16 were led away from Llanddeusant and on to the open hill at a brisk pace by Les Williams a promising youngster from the host club, Mynyddwyr De Cymru, followed closely by Anthony Kay and Kevin Hagley.

Despite a route choice which seemed to be designed to show the pursuing runners every minor summit of the Carmarthen Fans, Williams retained his lead as far as Bannau Brycheiniog (2630ft). The early pace may have been a little fast, however, as Hagley overtook Williams on the ‘hands and knees’ ascent of Fan Gyhirych to be a minute ahead at the half-way checkpoint of Fan Nedd. Behind, John ‘Puffing Billy’ Darby was improving quickly from a steadier start to be in third place, whilst Kay had found the tussocky going difficult and had dropped back to sixth, behind Adrian Belton of MDC and John Jameson of Cirencester. By the time Fan Llia was reached, Belton had caught Darby and was only 3.5 minutes behind Williams and a further minute behind Hagley.

The final two climbs (1266ft up Fan Fawr and 1700ft over Y Gyrn to Penyfan. at 2907ft the highest peak in South Wales) were to prove decisive. Belton’s superior strength, gained from good performances in the demanding Scottish Islands Peaks and Bens of Jura races, enabled him to catch Williams by the summit of Fan Fawr. He then demonstrated his class by running the section to Penyfan in 38min 24secs., some seven minutes quicker than the next fastest runner on this section, overtaking Hagley in the process. Although he had a lead of almost 5 minutes at the summit he did not relax on the final rocky descent into Cwm Llwch, and was over 7 minutes ahead at the finish.

Les Williams held on to third place for the veterans’ prize and Allan Smith ran a well-paced race to pick up the supervets trophy in 11th place. Tea and cakes and a wash in the stream rounded off a memorable day.

Hopefully the 1988 race will attract more runners to tackle the challenge of this classic route.
Martin Lucas

This race has recently gained an unfortunate reputation for being badly organised: however, the new organisers (Martin and Kay Lucas) did a good job this year, and even managed to arrange perfect weather. But what is the point of providing masses of food at the finish when I’m so exhausted that I haven’t even got the energy to eat?

Those who are not familiar with these hills might like some further information about the course. Its toughness derives from the absence of connecting ridges between the mountains; although the climb from Llanddeusant to Bannau Brycheiniog is fairly gentle, the rest of the race is a relentless switchback – but at least this means that one can usu­ ally rely on finding a stream to drink from at the foot of each mountain. Apart from a few stret­ches of nasty tussocks, most of the course is very runnable, though the hordes of day-trippers on Pen-y-Fan may provide addi­tional obstacles! The finish at Cwm Llwch is an idyllic place in which to lie down and expire.

The Trans Fan race is a gentle little romp from Llanddeusant to Cwmllwch! Over 20 miles through the remotest parts of the Brecon Beacons National Park taking in 6 major summits. On a good day it is one of the hardest races in Wales, this year, in torrential rain, it began to resemble ‘Mission Impossible’.

In spite of the ever worsening conditions 26 intrepid souls set out on an epic journey. Astonishingly only 4 dropped out and the last man arrived back 7.5 hours later. The race over, the legends began. Tales of runners swept down angry rivers, heroic rescues, groups linking together to ford streams which had been trickles the day before, horrendous stories of the impossibilities of navigation with the mist right down and maps disintegrating in the rain. And yet at the finish there was only elation at having beaten the worst that the heavens could throw down and the excitement at having succeeded against all odds.
Kay Lucas

The race was a counter in the 1988 Welsh Mountain Running Championships too. Source: http://www.fellrunner.org.uk/fellrunner/1987_Winter.pdf

The dry hot weather came as a surprise to those runners who had fought the raging torrents of Transfan ’88. The ideal conditions attracted a record 25 entries — no complaining of overcrowding in South Wales! — and an exciting race ensued.

Gallons of tea and a good feast rounded off a super day in the hills. Perhaps, one day, more runners will take the challenge of this classic route which, if it was 200 miles further north, would be over-subscribed well in advance.