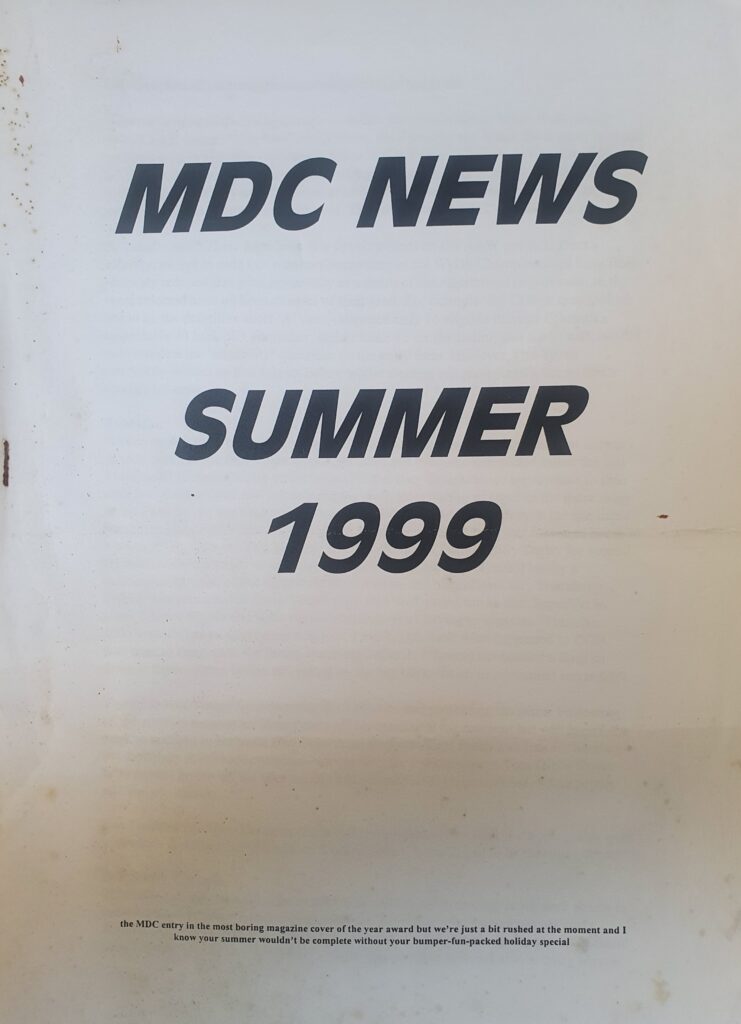 ‘Summer time, and the living is easy.. – a fine song but whoever wrote it obviously

wasn’t a fell runner. With Fan Fawr, Cribyn, the Transfan and Waun Fach races in quick

succession, and with Alwyn Nixon’s South Wales Traverse thrown in for a bit of variety

merchants. This flurTy of mid-season activity also means that time for writing the

solsticial bfp has been seriously limited. That’s my excuse and I’m sticking to it!

So, what’s new? There have been few developments on the AAW political front

recently, except to note that numbers competing in the Welsh Championships have been

seriously reduced this year, apparently as a result of the registration requirement as the

races selected have all been classics of their kind. For example, the Cribyn race – which

respectable 43 took part altogether, and of those 16 six (including one AAW official) did

not complete the ‘eligibility’ questions on the entry form. However, I’ve bored

What a superb day! 18 runners accepted the famous challenge this year (almost as many

of the Fans, but by the time the leaders were on the climb of Fan Gihirych the sun came

out and to be honest it was a bit too warm. Aled Rees (unattached) was first man home in

4 hours 3Sish, with our own Douglas Adlam holding off Puffing Billy Darby for second.

Of course, it’s not a race so nobody was really noting positions (yeah!) but by a

unanimous decision of the supporters the awesome and magnificent etc. Transfan

about 5 hours 40. He also wins the dubious honour of having to organise Transfan

2000- which has an impressive ring to it, I think. Don’t ask what happened to OGB,

down at Storey Arms before struggling up the big hill to finish in a personal worst 6:09.

Thanks to Pete Maggs for organising the barbecue and presenting the prize. Following

soon be restored to his usual fine form. Also thanks to Kay, Jenny and Jess for handing

out the drinks at the road crossings- we couldn’t do it without you! Tom Gibbs would

have run but he fell off his bike the day before and broke his collarbone. Some people

will use any excuse…

The Transfan fairy (not the same one as John was chatting to under the tree!) got to work

to produce some fine limited-edition T-shirts. Sorry, but you had to be there to get one!

have captured the imagination of a few people. For those who missed our previous

accounts, it’s a traverse of the 800 metre summits of South Wales (there are six of them)

from Llynyfan to the Grwyne Valley. The excitement lies in being able to use a bicycle

where it is legal to do so and in there being quite a variety of route choice. Following the

greybeard and Roy Ruddle nipped round in 6:14 on OGB’s 45 birthday- though I think

Koy could have taken big chunks off this. The challenge has been taken up since by Keri

Price and Tom Gibbs, who both have considerable experience of this sort of lunacy, and

they shaved another hour off the record by clocking 5:09 (I think). Hopefully an article

on is will appear eventually (big hint to Tom). Once the serious triathletes get hold of

this I think there could be some impressive times set. As yet there’s no girly record: any

Attendances have ranged from 14-and-a-dog to 2, but we’re ploughing on regardless and

high bracken in the old landslide at the back of Cwmyoy last week. The landlord of the

ADDey Bar in Llanthony is if anything even grumpier than the last time we were there.

There is one change to the list as previously circulated: instead of going to the Gwyn

otherwise known as Fred’s place. Note that he has moved house and is now about 200

yards further up the hill at Painswick Mead, Llanhennock. He would appreciate a call on

.. that John Sweeting was so far gone at the end of his pacing stint on Alwyn’s traverse

that he collapsed under a tree and started talking to the fairies. Apparently they made a

. that Doc Buffet has been racing in Greenland and that he has details of a race in

August. I’m sure offers of assistance would be appreciated…

volunteered to put on a race. So sling the banjo in the back of the pickup, pack the

.. to Ann Nixon on another international appearance in the European Championships at

the grand age of…

.. to Big Clive Horsfield on completing the Scotish Munros at an even more advanced

.. and to Keri and Tom (and Nick and Helene) for a fine second place in the Western

Isles Challenge. One day we might get an article!

Speaking of which, if this edition is a bit thin it’s because of a distinct shortage of

articles. Remember our motto: you no Write, we no print. I’m off to stare at the sun in

Cornwall, where the Cornish reckon that if the eclipse is a success they’1l do it again

after the traumas of last year. It is a relief to post a report at the start stating “summit

temperature 55f, Visibility- for ever, going – good, kit requirements/checks none, run in the

nude if you like”. The sun was out, the larks were up, the views were wonderful, God was in

his heaven and who cares who wins?

Well, quite a few, really. Mark Palmer and Geran Hughes matched each other stride for

stride to the summit, but Mark’s descending ability made the difference. He might have

half mile two thousand foot descent!). A little further down the field, Ann Nixon needed a

minute) and Nathan Reeks running only his second race. Even the almost perfect

record. (A minute after Owain crossed the line, the summit marshal checked in to report that

his dad had just reached the summit! Life can be so cruel). A suspicion of casualness crept

mile Llanberdr-Blaenavon on the morrow; one closely drawn group pausing just berore the

All in all, a truly brill afternoon out, everybody got an Easter egg, and all went home nappy.

Tons of thanks to K Lucas for marking and marshalling, Fred Parry for taking over the finish,

Cliff Jones for lending us his fields, fam, loos etc, and to lan and Mary at the Red Lion for 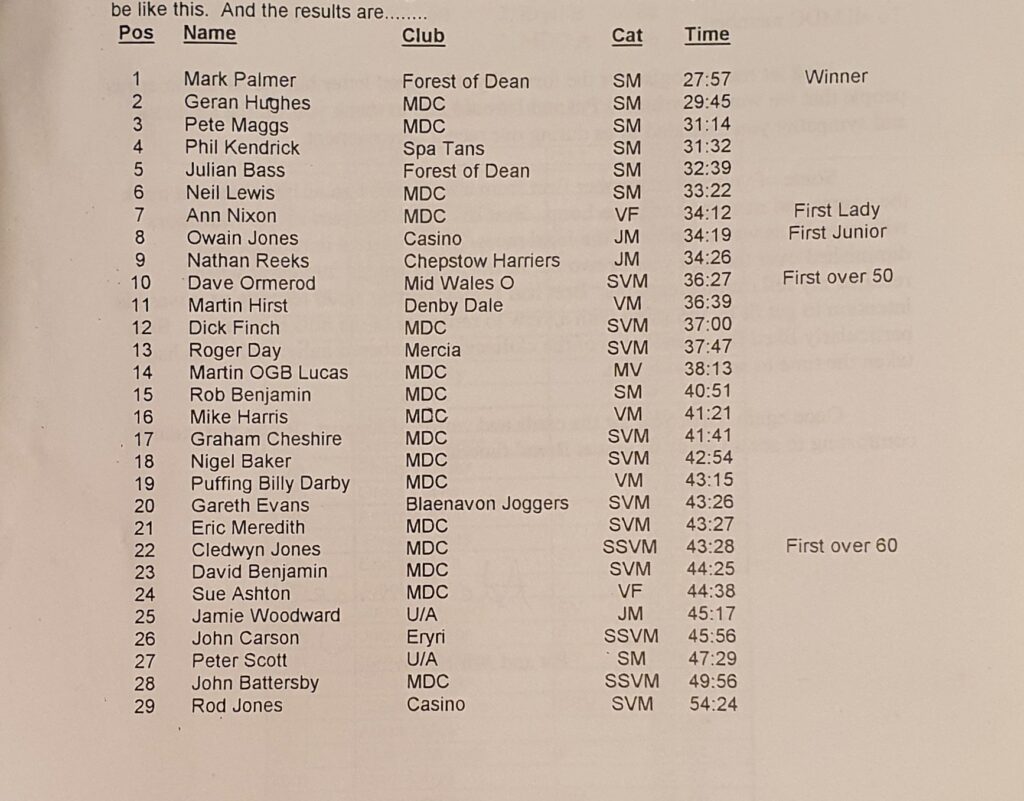 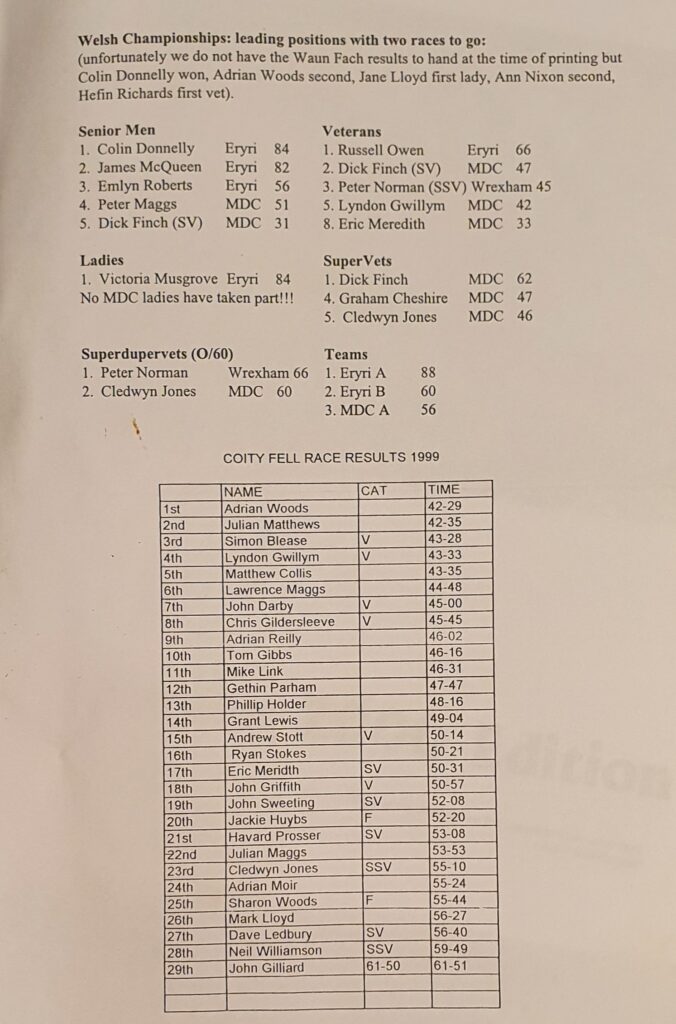 Orringe, son of our Secretary Adrian and Pat. There was a large athletic contingent at the

funeral, and Adrian has asked if we can publish the following letter. He doesn’t mention

it in his letter, but a collection is being taken for ‘Megadrive’, which is a Gwent-based

charity promoting safer motoring for young drivers, who apparently have the

proportionally highest accident rate. Anyone wishing to make a donation should send it

To all MDC members,

people that we want to write to. Pat and I would like to thank you for the kindness

and sympathy you extended to us during our recent bereavement.

with myself, as well as some of the local races. Brets interest in running had

recalled my fell running exploits. Bret had begun training again recently as it was his

intention to get fit by the spring with a view to returning to the hills in summer. Bret

taken the time to speak with him.

Once again thank you for the cards and words of support. It was particularly

comforting to see so many of you at Brets’ funeral.