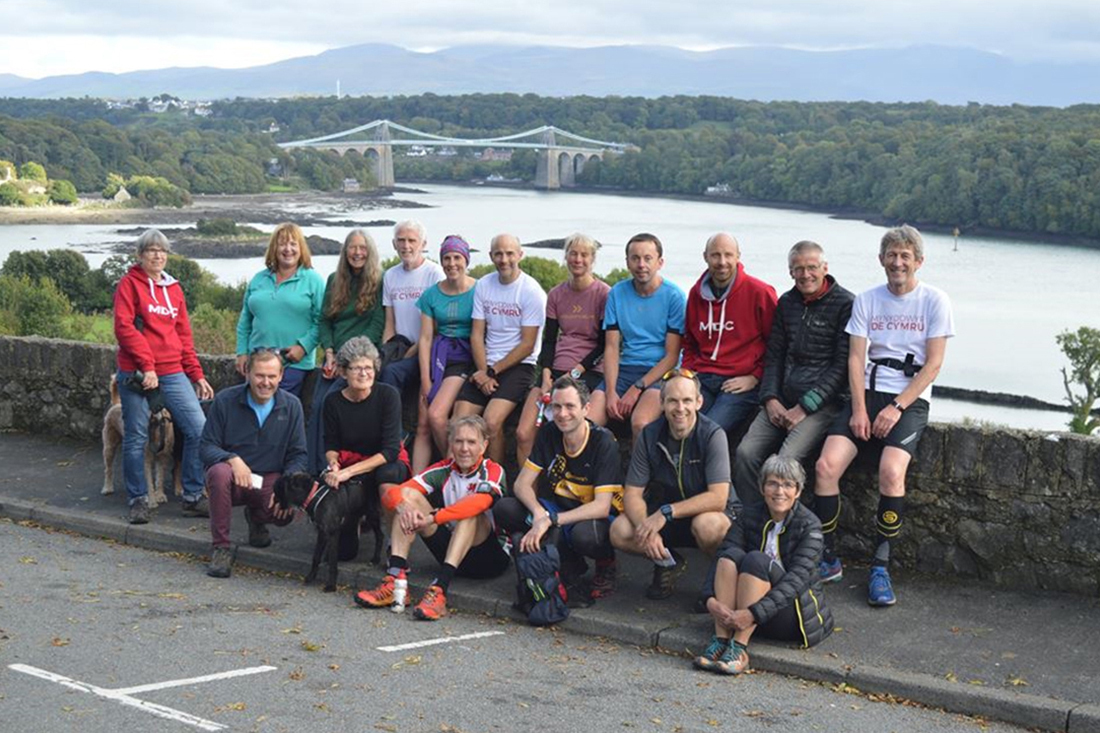 With the iconic back drop of Telfords Menai Bridge of stone behind us, the front runners for the circum-navigation of Ynys Mon assembled a little above the coast on a changeable afternoon, which threatened rain.

Leg 1. With the arrival (in the nick of time!) of the sacred baton and the electronic gizmo (the tracker), Gareth and Karen set off on at smack on 2.30 by their watches. Soon they were on the coast and passing under Stephenson’s massive steel bridge. A quick photo of Nelsons statue looking out to sea and the heavens opened. We believe this was the only real rain that fell on runners !

Sploshing on across slippery seaweed and wet board-walks, a climb into rural county and a short lane took us to change over for Leg 2.

The start of Leg 5 involved driving through woods to Newborough Warren and at the coast, the Sandman Triathlon was assembling. With Alice and Mark having taken on the baton and tracker, we followed them through a small part of the woods and out onto the beach where the crossing of a large sand bar, led us on to Llanddwyn Island. At high tide this would not have been possible !

A brief sun lit run to the lighthouse buildings at the end, passing a film set that we didn’t stop to investigate, and we there viewed the sea crashing onto the rocks with a strong breeze adding to the ferocity.

With the baton and tracker passed to Astrid, Tom and Marcus for Leg 6, we returned back along the beach to our vehicles.

End of Leg 7. John A, Marcus and Del. Baton carriers Kay and Martin.

Leg 9. Gareth & Caroline followed the river out of Aberffraw and onto the coast proper with only a slight diversion due to a lack of a positive sign. A short easy leg.

Leg 12. With Caroline delayed by the camper van stuck in the perilous quick-sand of Tywyn Fferam, Karen joined Gareth to do Leg 12, the run to 4 Mile Bridge’ and gateway onto Holy Island. A few creeks to travel up (without a paddle) and only a slight diversion off track due to a slate slab stile being hidden in a hedge !

Leg 21. Gareth, Karen, Caroline and Alice waited on the bridge of the mighty creek that leads to Llanfachraeth to take the baton etc. up to Porth Penrhyn Mawr. The boys from Leg 20 arrive on time and off we go. A short run across fields with a pebbly beach to finish off.

Leg 24. Caroline, Alice and Gary set a fast pace on this one. Gareth & Karen also ran but dropped off the back a bit and took interesting lines off the last headland!

A slightly later start (thanks to the completion of scheduled legs 28 & 29 the night before) allowed time to break camp unhurriedly and move on to the east of the island. Sunny and cool over there !

Leg 32. G & K. This was a brief jog from a tiny car-park up to the lighthouse at Point Lynas and back. A cold breeze accompanied us. We elected to carry on to do Leg 33 following Astrid, Tom Marcus and Alex just to keep warm ! They soon disappeared over the horizon! When we arrived at the change over point, Del was there to whisk us to Traeth Ligwy where Alan had kindly moved Karen’s car.

Leg 36 G & K. Arrived with time to spare so….time for a coffee and cake in the café. (whose delight’s Kay and Martin had already sampled ! ) As we drank ours, Kay set off on her own as she felt it better to get ahead of us. Well it took almost until the end of the Leg to catch her  (despite an unplanned circuit of a field !) and Martin had run out from Red Wharf Bay to run in with her. It was a nice leg, taking in cliff tops and Benllech sands with a little bit of road.

With time to spare, we elected to try and see the change-over at the start of Leg 39. Del drove us there. Missed the change-over but saw the outgoing runners and visited the point to take some pics of the Sound and Puffin Island.

Leg 40 rendezvous point was a small layby on a dangerous bend. We sat in Del’s car awaiting the incoming runners who were Alan, Alice and Caroline. They were running along the shingle beach but overshot slightly and seemed to pop out of a hedge a bit beyond. Gareth & Karen took over and swept majestically through Beaumaris and up a sod of a tarmac hill past the Golf club. A brief stretch of off-road was followed by an interminable stretch of tarmac again. Soon though, a sharp descent dropped us into the outskirts of Menai Bridge town and the welcome sight of Astrid Gibbs, Gary Davies, Alex Hirst and Howard Owen. A quick trip through the back streets and we were under the Menai Bridge itself.

Then on through a small park and John Aggleton, Tom and….others ? (not sure) joined us for the last little bit of flat before the gentle rise to the car-park we started in all those miles ago. Rapturous cheering from the wall above us, from the rest of the Team as we finished. Big smiles all around. It really was a good club outing and the Club baton and tracker were carried around all 130 miles of it.