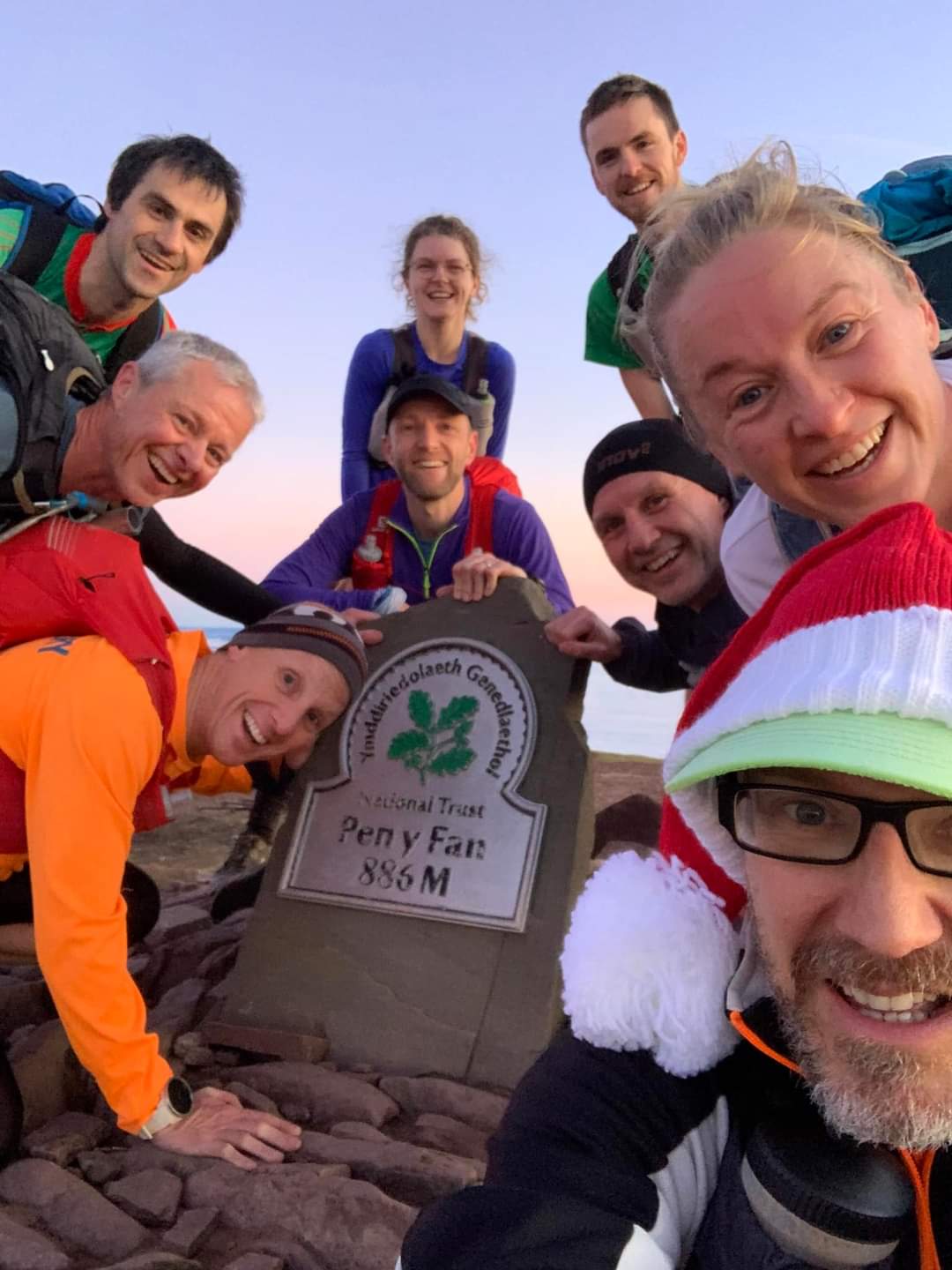 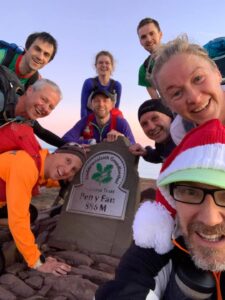 With the forecast looking good, 9 intrepid runners (Myself, Darren, Martyn, Geraint, Will, Ellis, Matt, Sophie, Simon) set off at 7am from a misty car park at Cwm Llwch for the 2021 MDC Winter Transfan.

Within half an hour, we arose from the mist onto the slopes beneath Pen Y Fan with a full moon on one side and the sunrise on the other – absolutely stunning views looking back to the cloud inversion in the valley below.

I joked about joining the queue for the summit, but there actually was a queue! – at 8am on a Sunday morning, there was easily over 30 people there, many with impressive camera setups. A quick summit selfie later and we set off for Corn Du and down to Storey Arms with everyone stopping to strip down as we were all beginning to sweat.

I was feeling the pace was a bit quick, stopped for a wee and dropped back on the descent to Storey Arms and the waiting boot of Del (Taffy Ram), who, true to his word, did an absolutely sterling job of supporting throughout the day, with little nuggets of Transfans past and a boot full of flapjacks.

We fairly quickly settled into a formation, 3 x 3, heading up to Fan Fawr with stunning clear blue sky looking back towards Pen Y Fan, before dropping down to the RSB across the stream at the tip of Ystradfellte reservoir.

I opted to get wet feet, others decided to grapple with the barbed wire, but we all made it safely over for the slog up the other side to Fan LLia before dropping down to the road crossing where once again Taffy Ram boosted our spirits and supplies to ready us for the next climb.

I think at this point, as the conditions were so lovely and everybody was enjoying the scenery, the pace slowed a little and a there was a much more relaxed feeling in the air, no one was out to set a record time and it really was just a great day to be in our mountains.

Fan Nedd, Fan Gyhirych and before we knew it we were meeting up with Taffy Ram again at the final support point at the road crossing before heading on to LLyn y Fan Fawr. We were joined on this section by Gareth who decided to come up to Fan Brecheiniog before heading back to his car. But not before witnessing some of the more hardy MDCers go for a chilly dip in the lake!
One final trig point selfie at Carreg yr Ogof and we were on the final home straight. A mere 7 and a bit hours after starting, everybody arrived safely and happily back to Llandeusant all agreeing that this was indeed a grand day out.
A big shout out must go to Martyn for organising the transport, and generally looking after everybody on the day, Taffy Ram for the faultless road support and professional photos and of course all the runners who made the day such a memorable occasion.

I have a feeling that the Summer transfan is going to struggle to compete with the conditions we were blessed with on the day, get prepared to have full waterproofs at the ready.